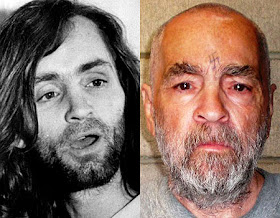 If Crazy Charlie is for it, how can it be wrong?:


Crazed cult leader Charles Manson has broken a 20-year silence in a prison interview coinciding with the 40th anniversary of his conviction for the gruesome Sharon Tate murders - to speak out about global warming.

The infamous killer, who started championing environmental causes from behind bars, bemoaned the 'bad things' being done to environment in a rambling phone interview from his Californian jail cell.

'Everyone’s God and if we don’t wake up to that there’s going to be no weather because our polar caps are melting because we’re doing bad things to the atmosphere....

...Manson, who described himself to his interviewer as a 'bad man who shoots people', brainwashed members of a commune known as The Family into butchering eight people including film director Roman Polanski’s pregnant wife Sharon Tate in July and August 1969.

Speaking to Vanity Fair Spain magazine of the killing spree he led his crazed disciples on, the 76-year-old said: 'I live in the underworld. I don’t tell people what to do. They know what to do.

OK, so my first reaction was to laugh too, but think about it: Manson doesn't cross the continent in private jets. He doesn't have a yacht. Or a compound in Tennessee that uses more energy than the space shuttle. I mean, the worst thing he does to the planet is ferment raisin wine in his toilet once in awhile. His lights are out at 10:00 every night. He's a much more committed environmentalist than Al Gore.

If you want to make a dent in this Gaia thing, lock Al Gore up with Crazy Charlie for awhile. Al can teach Charlie how to sell meaningless carbon credits, and Charlie can teach Al how to hide out from those Aryan Nation guys. Win-Win, if you ask me. And it'd give Gaia a rest to have Al off the streets.

New comments are not allowed.